I had been umming and ahhing about what to do as my next project. I had toyed with the idea of another strategy game, albiet less niche hardcore and more casual, but fancied putting my skills to the test elsewhere with something a bit more fast and furious with an infinitely shorter development period. Hence the Swag 'Em Up was born. 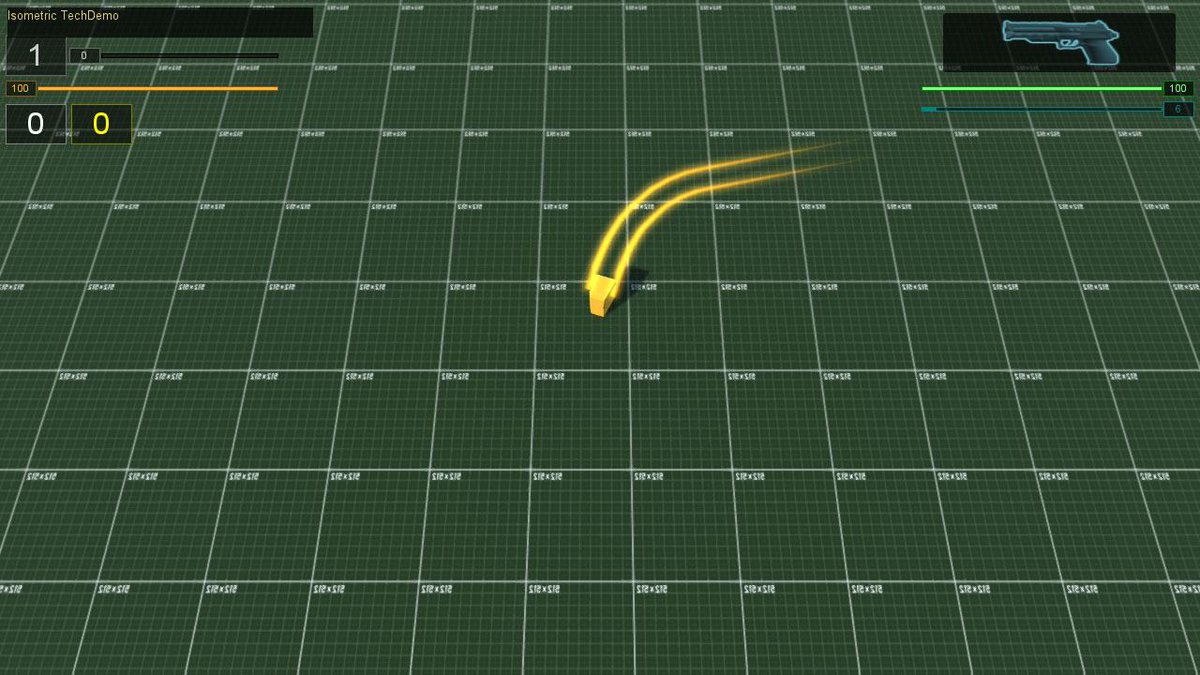 Swag 'Em Up as a gameplay genre revolves around rushing about, blasting enemies, and unlocking items and collecting powerups and upgrades which form the swag question. Rogue-like or possibly rogue-lite seems a good basis for this as randomizing items, placement and enemies should lead to varied challenges and unique replayability with new unlockables being available dependant on how previous play-throughs went.

Initially I'd toyed with the idea of a top down view but immediately found it rather boring visually, so I switched to a rather high isometric view of around 70 degrees. This showed off models better and gave more depth to the scene. Here's a quick visual explanation of the differences.

After deciding on my camera system I created a screen relative movement system. When input says up and right, the player's avatar moves up and right relative to the camera/screen. This works especially well with gamepad controllers which can increment the rotation of the control stick.

I coded a new cooldown system for weapons and sprinting So that abilities take a few seconds to recharge. My thoughts for player abilities were thus, light attack with no cooldown, heavy attack, evade (in this case sprint) and special object use. I created a few new systems to allow for permanent upgrades as well as temporary time based ones and a whole experience gain and leveling system which adds health and regen bonuses. Originally I had considered a cash system alongside score and XP to buy unlockable items but instead have opted for trading experience for them. This method involves the player deciding whether they'd like to spend their hard earned experience on powerups or let it accumulate for leveling, which grants upgrades of it's own.

And here's a little demonstration of what I've got after a month of coding featuring our very own cube placeholders. Camera relative control system, light attack, heavy attack, evade, cooldowns, experience gathering and leveling.

Now it turns out that there is a minor issue with the control system - it's bloody difficult to shoot at anything accurately. This is not really helped by being a placeholder cube with no obvious centre of facing. I might add some sort of laser aiming object to help alleviate this, or I might split movement and direction into two seperate states, like in a twin-stick shooter.

In the meantime, there it is, the start of my new project: "Action Rpg Mecha Musume Catgirl Rogue-like Swag 'Em Up".

Looking forward on how this develops.

Torque 3D Owner Andy Wright
BrokeAss Games
#8
03/09/2015 (4:58 pm)
Looking good Steve, I agree about the camera being at a slight angle, looks much better than the top down view, its really surprising how much 'flatter' it all looks in comparison, out of curiosity, would you be going with a locked camera at that angle, or the ability to rotate it around the player, reason im asking is because Ive started playing torchlight 2 with some friends again lately, and one thing i found always annoying is its method of obscuring the vision of the player behind objects with the red and blue 'ghosts'
Locking the camera at the angle but allowing rotation would suit that, might make level design a bit easier as you wouldnt have to consider too much the visibility angles and such when a player can change to suit their needs, mind you even saying that, you could allow the angle to be changed too and open it up to 3rd person fans aswell...

Associate Steve Acaster
[YorkshireRifles.com]
#9
03/11/2015 (6:14 am)
Andy, maybe something to think about, though that's a lot of extra input for a twin-stick control system, guess it could go on the D-pad.