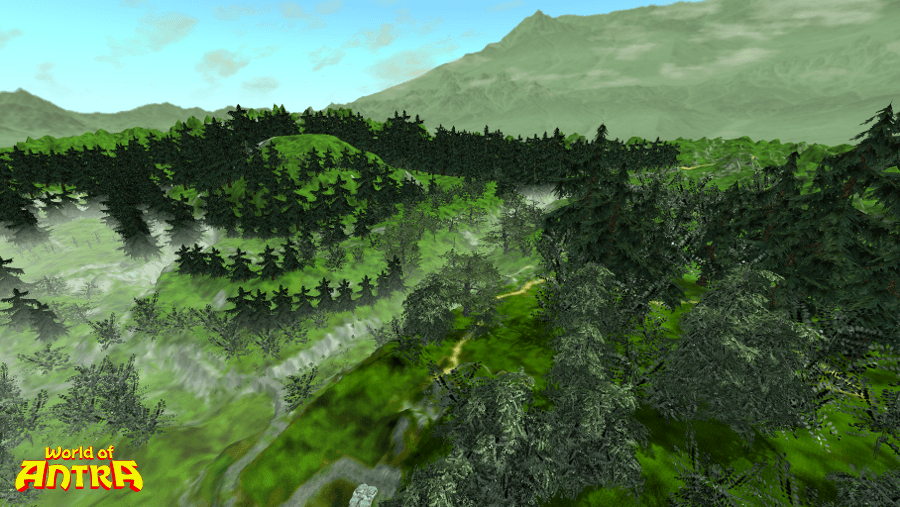 Above is my favorite picture from the last several rounds of screen capping... it's a lot closer to what I had in mind than some of the interim versions--making dense treelines is hard!--but I licensed HPT Software's Forester Pro and have been making and remaking (and remaking) models until I got close to what I want.

Made my 12/31 ship-it-or-shut-it-down deadline by the skin of my teeth, two weeks into a bug which was causing the server to stop talking to the databases every single night (and which would not be solved for another two weeks, meaning there was no sleep at all there for about four weeks on either side of the deadline--every time I dropped off I had to get up and run to the server facility and restart the data connections!)

The list of items in the design document which qualified it as "done" were checked off. All planned systems were present, if barely exposed at the user level. I did not feel comfortable, however, promoting the game at this stage, and I won't feel comfortable until more polish and content--especially content--have been applied and made available.

So I thought about it real hard and decided to go with "Gamma" in which the game will be playable with the understanding it is rough and unpolished and somewhere on a horizon between "beta" and "done", with a build released every week for the rest of the year.

For explorers, or for those who have to be "first", or those who just want the experience of participating in something where the devs are very much listening, the gamma client is available after signup, and I'm good with those folks getting in and trying it out--there's a lot to see and do, but it's not well-exposed or explained, which make it a terribly rough go for most players.

I really appreciate the feedback I've gotten from the hardy souls who have braved the brokeness to date, and juggled the schedule in order get all the issues reported fixed. I also got lucky--the first few visitors were not only brave, but literate, and took the time to write out exactly what the problems they had were--which made it much easier to get in there and fix them.

An example: I had set the game up so new characters zoned into one of three starting levels at random. Pretty much so it would always seem fresh when you made a new alt. But a player tried to play for the first time with someone, and their characters wound up maps and maps away, and they had no idea how to find each other. Now that is a problem, and one that would never occur to me, who mostly solos--but I can see how it is a problem for people who play in duos, groups and teams.

Durr... now there is one starting zone and new players zone in only at one spot. And I never, ever would have thought of that until someone talked about their experience with me.

I think it better to write off several hundred hours of zone development than to leave someone confused or worse, lost. And the other zones are still there, maybe at some point a button will be added to the login screen allowing a player to choose their starting zone--but that will require development and testing time best put to other use right now.

Development is shifting from raw systems creation to improving those systems, and using them to create content. I wrote ten in-game tools to write content last summer, and two more last month that haven't been ported in-game yet (they are running in the internal web portal until I find time to port them into the dev client). Pictured below are two, the Itemulator and Awardulator, used to drop items on alts in testing and tweak treasure tables for NPCs. 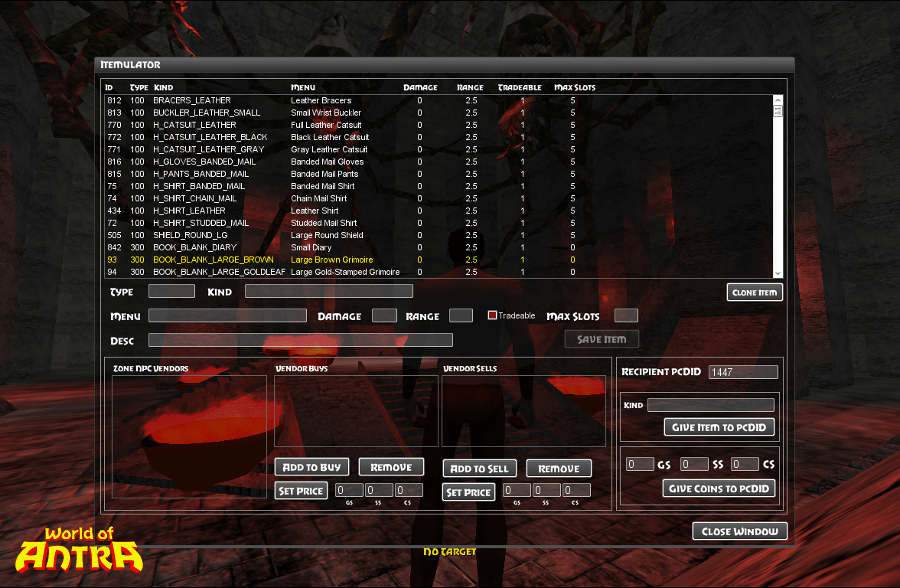 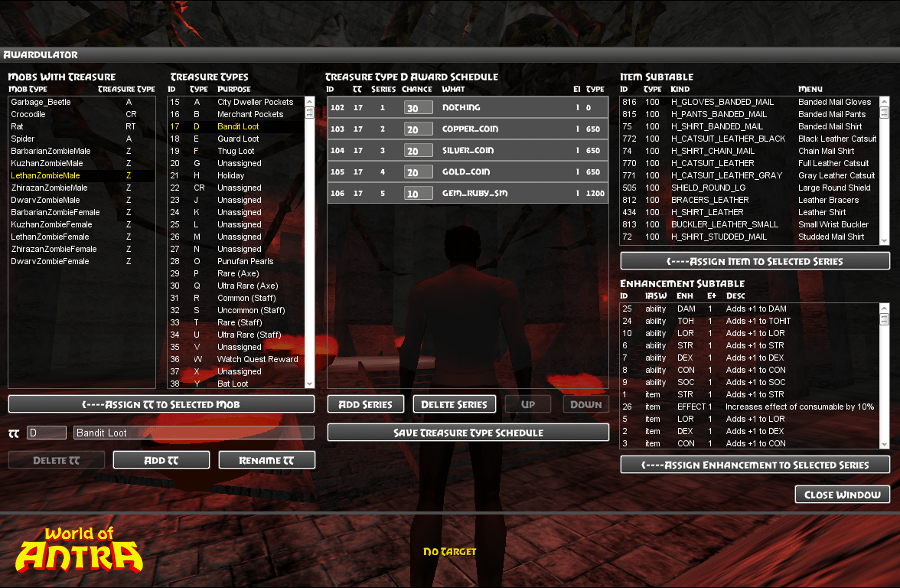 Going from coding systems to content creation is not as sudden and discrete a change as I had thought it would be, but it is taking place. Just got through another pass on the quest writer this week, and Friday's build contained twenty-two fetch and kill quests which although simple, aren't bugging out as the testers complete them and are properly awarding EXP and rewards.

Grudgingly, painfully, things gel into a closer approximation of what I have in mind. I don't think I'll ever understand any of this with the facility exhibited by many of the posters here, but I am tackling things impossible for me a year ago and pulling them off--maybe not very polished, but can be done at all still surprises me every time it happens.

@Dwarf_King - I am zoning and especially occluding everything. I generally get 1-2 from zoning and portaling an interior, when inside a building. Using the occluder planes has picked up a lot of fps for me outdoors.

@D Fasel - I agree that dropping draw calls are a good indicator things are getting better, and I am working to keep bringing them down. Is there a clever way you have of making atlases automatically? The thought of retexturing all my models is... (the sound of a transmission locking up noisily offscreen) right now.

My adventures in T3D are chronicled at http://www.worldofantra.com. Please be aware the subject is sword-and-sorcery, and the occasional bloody or bare body part may be in scope.

• Macro and Micro: Quests in the Romadi Steppes
• Traveling Twice the Speed of Sound
• The Search for Quests
• And Then You Look Up, Which is Worse Than Down
• Stay on Target

Torque Owner Richard Ranft
Roostertail Games
#1
02/15/2016 (5:44 am)
You know, there's nothing wrong with multiple starting areas. But they can't be random. WoW does this by race and faction - which seems arbitrary and annoying, but works - and it's always viable to just ask the player which starting area they'd like to enter. So don't lose hope on that "fresh feel" idea, I think it's a good one.

I'd love to do starting zones for each character race, but realistically, I don't think I could find the amount of time and budget needed to put that amount of content together. It would be really fun though.

At the moment, characters start on a "first visit to the City" basis. There are three gates in and out of the place, each gate leads to a low level zone with and without some resources the other two held, for variety.

I will likely return the player choice option as buttons in the character creator a little ways down the road. Probably when I get to working over the GUI, because testing the buttons can be part of general testing on that schedule.